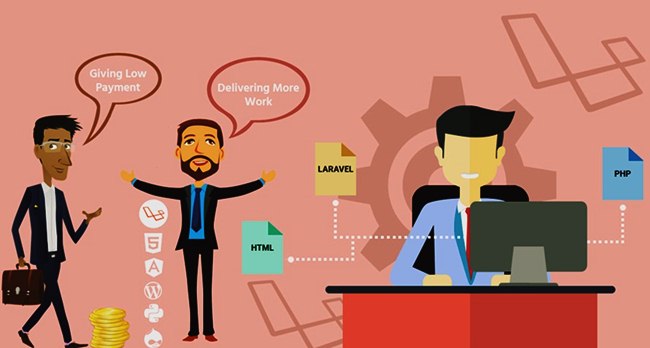 If you are an entrepreneur looking for creating a website today, you have likely asked the question which platform should I use to build my website? In PHP world, developers have two major choices – one is the content management system that is WordPress or second is a PHP framework called Laravel. We already know that WordPress is driving around 26% of the web and it’s on the rise. On daily basis, there are over 500 sites being created on WordPress.

Most of the developers love WordPress due to its prebuilt CMS that might seem time/money saver and it is an obvious tool in that term to achieve business tasks. It also offers flexibility, SEO friendliness, and fast development process. However, while it is really better to use a CMS rather than the typical modern framework like Laravel development framework but Laravel offers more custom stuff while WordPress is a plug and play process. If you want to build some mind blowing major websites like Facebook, use Laravel. If you wish to create your own fashion blog or e-Commerce website, you might as well use WordPress.

What is Laravel Framework?

Laravel is a PHP (Personal Home Page) framework for web artisans. It is an effective PHP framework based on MVC architecture and it is designed for creators who want a simple and delicate toolbox to make a fully featured application. It was initially developed by Taylor Otwell. It provides you with techniques to modularize your codes and make them understandable. It is a free open source software under MIT Authorization.

Laravel is undoubtedly one of the most popular and widely used PHP frameworks. More than twenty thousand developers highly admire the robust features of this platform.

Routing System – Laravel proposes the flexibility to its programmers to select which route is triggered by the application. It basically speeds up the application route registration. Laravel routes are defined in the app/Http/routes.php file, which is automatically fetched by the Laravel framework. This is the suitable framework if your application has a large number of routes. The basic Laravel routes receive a URI and a closure, by making an expressive method of describing routes. The developers just need to put the name of the route and it will automatically fetch the right URI. It is generally implemented as a part of the deployment method.

Query Builder – The database query builder gives you an acceptable and smooth interface to creating and running database queries.

Automatic Pagination – Laravel’s Pagination system is designed for easy to use and implement use cases. This pagination feature provided by Laravel actually takes care of setting the limit and offset based on the current page being reviewed by the user.

Multiple File System – It offers native support for multiple support system and for that Laravel uses third party package flysystem for providing multiple file support. The developers can use local or cloud-based storage to deliver simple configuration. You can easily set storage options in config/filesystem.php file.

Contracts – It is basically a set of interfaces that describe the core services. If you want cache in the package, you can easily get that by using illuminate\contracts\cache. It allows developers to do cache programming in the code using the concrete cache class without changing the package code.

Inbuilt Authentication – Authentication is the most critical part of web development because Developers consume a lot of time for code authentication. Authentication has become easier with Laravel 5.1 as it comes with the integral authentication system. You need to configure the database migrations, model, views and controller to make the system work.

In spite of having lots of advantages, there are some drawbacks as well.

Laravel Web development is quite a slow process due to copy and pasting of existing codes from other projects. For most of the application developers, it is new, so they have to face difficulties. They can also have problems in extending codes and classes. If we compare with other platforms there is no extensive community support and, reverse routing methods are complicated. There is also a discontinuity between its versions and it might be possible that your app may crack or break if you update the code to the next higher version.

WordPress is also a powerful PHP framework and it was originally developed by Matt Mullenweg and Mike Little in 2003. Basically, it is an open source content management system that is based on PHP and MySQL.

Benefits of WordPress Over Laravel Development

WP is more friendly – if you are poor in programming or you are not a good developer then you should go for WordPress rather than Laravel, considering only the technical aspect. With WordPress, you can build a website within minutes. You don’t have to be a knowledgeable developer. As it gives you thousands of plugin and themes which reduces your extra efforts and time. It can also help you rank better on search engines.

Easy and better for clients – If you want to escape from all the technical problem and just want to start writing your content then Go for WP. You have to be advanced in PHP web Development to use Laravel effectively. You’ll have to take care of security and maintenance. Laravel learning will be troublesome for a novice developer.

WP ranks better – In WordPress, developers can go into plugin section and install excellent plugins to boost functionality which is not easily possible with Laravel. Many of the top websites on the internet are using WP. These are big brand names that are using WordPress BBC America, TechCrunch, The New Yorker, Sony Music, MTV News, The Wall Street Journal, Beyonce, Microsoft News Center, Bata, Facebook Newsroom and more. It is difficult to find the popular website that is using Laravel. Some websites that were built with Laravel but they had not achieved good ranks.

More dynamic site in less time – Most of the Laravel websites are project site. You have to be very strong to develop a complex Laravel code that makes a website look better. But with WordPress, you have many themes and plugins that will give you a more complex and better site than average Laravel coder’s site.

Laravel lacks in documentation – If you look at a Laravel site most of the documentation is just a list of functions. Laravel Developers have to put in some extra efforts when it comes to documentation for their developers. While you don’t need any documentation with WP because it already has that.

Laravel is a different platform for the developers. It is not mature and older than the other framework but its capability of solving typical challenges makes it more popular. It is fast, safe and secure because of simplicity and functionality of its code.

Development of applications using a framework is a little bit expensive in the beginning but not for the long term as compared with CMS like WordPress Development. Not all the frameworks are able to solve all the complications and problems. It’s up to you, take your decision according to your business requirements, make plans and solid strategies, what your customers want and then only it will be a perfect decision that will give you best result.